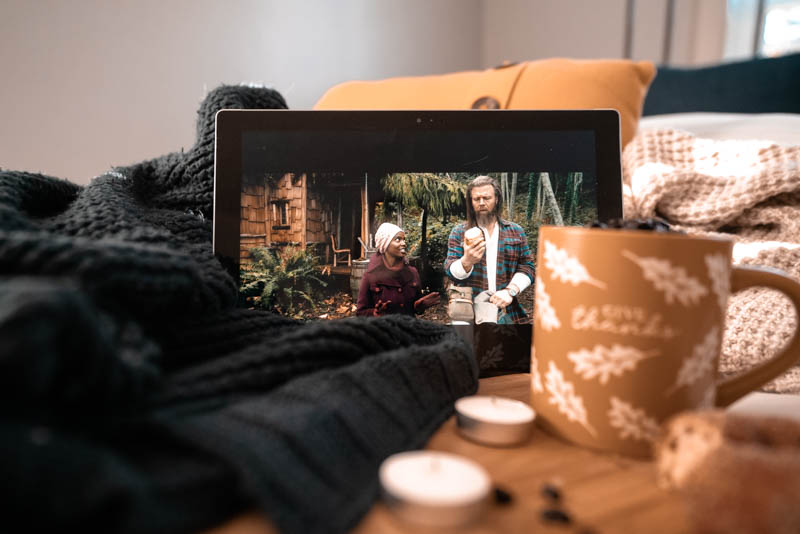 When I give autumn a second glance or whiff, I no longer smell the decay or rot. But instead, it’s romantic and old. The air smells of camp fires, cedar wood, the sweet fragrance of a woodland walk, musky and sweet--all hidden within the decay. I smell a bouquet of cinnamon, clove, and nutmeg. The oven wafts fresh sourdough bread, calling me from my stupor.

Autumn smells of the old world, a musty library, homemade bread, gatherings by the fire.

Most of my life, autumn didn’t really ever exist. It was merely an extension of summer and suddenly winter. Trees would one day have leaves and the next, as if the tree sneezed, leaves were gone.

I grew up in the American south, and I had clung to books or films to help me fall into the autumn spirit. So I updated my list and thought I’d share it with you, in case you needed some comfort and hello old world films to get you into the spirit. I have a list of Autumn Books if you’d rather read to summon autumn’s spirit.

I’ll start with one of my favorites, the Little Women series adapted by BBC/PBS.

Vanessa Caswill directs the 2017, 3 part mini series of Louisa May Alcott’s Little Women. It is pretty standard and follows the books, Little Women and Good Wives, pretty well. This film is set in New England and the views of autumn are everywhere in this series. I think what makes this series (and any of the adaptations) poetically fall is the letting go and unnatural goodbye. Letting go of those we love and letting go of expectations epitomize that feeling of autumn. The casting and photography is beautifully done. I think you’ll enjoy it.

I, of course, recommend all the other adaptations of Little Women. I think this story is hard to get wrong, as it was so well done by Alcott.

PBS created a quiz: Which March sisters are you?

Here’s the link if you’re curious. I’ve always hoped to be a Beth, but I might be more of Meg...

A group of gifted orphans (Constance, Kate the Great, Sticky, and Reynie) are recruited by an eccentric benefactor to go on a secret mission to save the world. Armed with their own unique gifts of intelligence and creativity, these children will inspire you with courage and kindness. I left this series wholly uplifted and warmed to the soul. It’s a cozy mystery full of riddles with views and cabins and wardrobes that mimic an autumn color palette.

Get to know the characters and maybe solve some of their riddles.

This show kept me on the edge of my seat, but not in a scary movie kind of way, just a little nervous energy kind of way. I came to really care for these characters and wanted them to succeed. I really loved the banter and friendship between Miss Scarlett and the Duke and the eventual mutual respect that they earned for one another. It’s a must watch if you’re in need of a mystery with a twist.

Emma Watson and Dan Stevens star in Disney’s remake of Beauty and the Beast. The nostalgia and the colors of this film will inspire every ounce of autumn love. It is an homage o the old world of fresh bread, books upon books, rolling hills, mystery, magic, and love.

It might not be on everyone’s top autumn list, but I’ve grown to love this film more and more so every time I watch it.

Anne with an E is somewhat of a controversial choice. Many devoted fans of the books were disappointed in the darker aspects of the adaptation. As an avid and devoted fan, I appreciated the creative insights of this story. It was a story for Montgomery’s older audience. Honestly, I didn’t think the film was too dark or gritty in anyway. It is a departure from the books, but crafted with the older reader in mind. And similarly with Beauty and the Beast, this series evokes nostalgia in the best way that autumn does.

Filmed on Prince Edward Island, you can expect all the lovely autumn views, changing leaves, wool berets, and autumn wardrobes.

I’ve written a whole post about this one. It is a forever favorite and a must watch if you have access to Netflix. A twist on the Holmes story and familiar to the Miss Scarlett and Duke series, a female detective solves crimes and mystery in a Victorian London backdrop.

The tone, dialogue, and film style is light, witty, and cheerful. If you’re in need of a heartwarming mystery with a charismatic cast, I highly recommend this one.

The film is adapted from Nancy Springer’s Enola Holmes book series, which I also highly recommend. The tone and themes are fairly consistent to the film.

A Netflix original starring Neil Patrick Harris as Olaf and Patrick Warbuton as Lemony Snicket, A Series of Unfortunate Events comes to life in a 3 season series.

After the loss of their parents in a mysterious fire, the three Baudelaire children face trials and tribulations attempting to uncover dark family secrets.

A Series of Unfortunate Events will make you cry and laugh all in a single episode with its over the top satire and clever puns. The Baudelaire children’s resilience and strength might mimic winter more so than autumn, but the mystery will inspire an autumn feeling like no other.

Thank you so much for reading. I hope you enjoyed this little curated list of 7 cozy television series and films to watch this autumn.

Wishing you a cozy season,
~JH